A Jungian and esoteric psychology orientation

ASTROLOGY looks at the sky of one’s moment of birth as an archetypal map of the psyche, the interior design of consciousness. As such, the natal chart is a unique source of insights into patterns of character and experience, relational dynamics, gifts and challenges, lines of personal growth and fulfillment.

This set of inner dispositions is exposed to the changing qualities of the collective wheel of time – the planetary cycles of our deeper, transpersonal self – with which it resonates and “dissonates” to make the inner sounds of experience. It is from these sounds of joy or distress, inspiration or confusion, that the soul extracts the consciousness which feeds its unfolding and growth. As such, the chart is a clock which indicates in a symbolic language what “kind of time” it is for the psyche.

These two dimensions, structural and evolutionary, give access to a comprehensive intelligence of self and destiny which illumines one’s psychospiritual dispositions and offers new perspectives on the significance of past and current experiences.

What you can expect from a consultation:

My approach to astrological information is archetypal and oriented to facilitate psychospiritual growth.

What is Esoteric Astrology?

Based primarily on the works of Alice Bailey, esoteric astrology expands the reaches of traditional astrology by opening doorways into the cosmo-spiritual ground of planets, signs and cycles—the spiritual grounds of our experiences and motivations. This it does very practically by introducing new tenets which lead to a more differentiated interpretation of psychospiritual purposes and evolutionary steps:

In traditional Astrology, each sign of the zodiac is said to be ruled by a planet which conveys its energy and actualizes its operations in the psyche. Esoteric Astrology adds to this traditional—“orthodox”—level of rulership two levels which correspond respectively to the soul and spiritual expressions of the zodiacal energy. As “esoteric” or “hierarchical” ruler, a planet speaks to the soul quality and spiritual intent of the sign. In the chart, it directs one’s awareness to the way in which the soul seeks to grow into the deeper intention of the sign.

As an illustration, Aries, the sign of action and initiative, is ruled traditionally by Mars, the planet of physical strength, instinctual will, courage and enthusiastic self-expression. “Esoterically”—on a soul level—Aries is ruled by Mercury, emphasizing the intelligence and wisdom which direct and fine tune Aries’ daring of new beginnings when the consciousness operates at a soul or group conscious level. Hierarchically—a level of initiate or planetary consciousness rarely applicable to average humanity but significant to understand the sign—Aries is ruled by Uranus, pointing to the spirit of Aries as a power to seed new ideas, create new “worlds” and launch new paradigms. 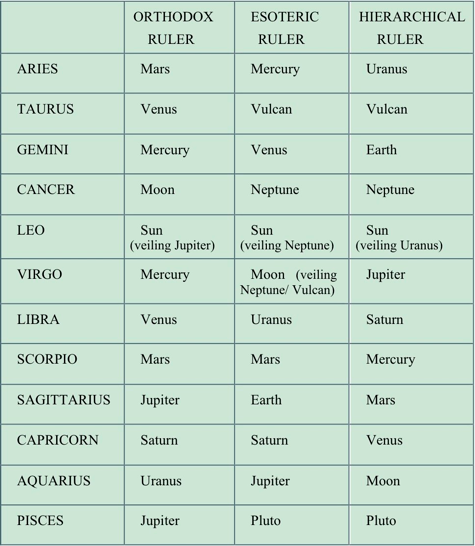 Following are some general directions offered as food for thought rather than tabulation of facts. Planets have a whole range of meaning, depending on the consciousness of the person experiencing and expressing their functions:

Moon and Pluto rule the base chakra, the security and survival level of consciousness. Pluto speaks to the survival (to compulsive) power of personal will and, on a higher level, to the essentializing power of spiritual will (associated with the sacrifice petals of the soul).

Mercury rules the linking, networking, informative intelligence of the nervous system. It also rules the current of light and eventually power which runs through all planes and connects all centers. It rules the  kundalini.

Venus rules the attractive, harmonizing, blending, unitive forces at work in the sacral center (physical union) as well as the Ajna center (fusion of personality and soul), the soul itself (the great mediator between body and spirit) and its central nucleus, the jewel in the lotus (the seat of the monad, the philosopher’s stone of fused spirit and body).

Mars rules the instinctual, self-projecting willfulness of the desire nature centered in the solar plexus and expressed through the throat center, as well as the will and courage of the idealistic warrior-activist type of soul.

Sun rules the creative radiance of the self, centered in the heart chakra.

Jupiter rules the inclusive understanding and wisdom of the Ajna center.

Saturn rules the shaping, organizing, integrative and grounding forces of the head center.

Neptune rules the higher levels of astral and solar plexus consciousness (spiritual imagination and aspiration) and the unifying power of the love-wisdom petals of the soul, attuned to the buddhic level of universal feeling consciousness.

Vulcan rules the crown center and the will-sacrifice petals of the soul, attuned to the Atmic level of universal will.

Back to top
mobile desktop